Warning: Parameter 2 to wp_hide_post_Public::query_posts_join() expected to be a reference, value given in /home/sidiario/public_html/wp-includes/class-wp-hook.php on line 307
 The best graphics cards – Page 4 – Si diario 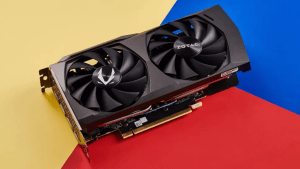 7. Nvidia GeForce RTX 3060 12GB
The decision to load the RTX 3060 with 12GB of GDDR6 memory appeared a strange one at first, and in many ways it still is. It’s more memory than the RTX 3080, after all, albeit slower stuff, and it tops out the RTX 3060 Ti too. However, the RTX 3060 wields it well, managing to dispatch the RTX 2060 by a large margin in most games, and by enough of a gap in the rest to make it worthwhile.

And we’re not going to turn our noses up at 12GB of VRAM when 6GB is the likely alternative.

Perhaps the most newsworthy shake-up for the Nvidia RTX 3060 came with the announcement of a hash rate limiter, which was designed to keep the card from operating at its full capability while mining Ethereum, the crypto of choice for GPU mining. Nvidia hoped that’d sway miners towards its new CMP line-up, built from off-cut GPUs not fit for gaming consumption, while supposedly leaving more GeForce cards for gamers. It didn’t stop the card from selling out of course.

With a decent generation-on-generation improvement and plenty of speed at 1080p and 1440p, the RTX 3060 12GB is a graphics card easily argued for.

It’s also nominally cheaper than the RTX 2060 was on launch day, though it’s not so easy to find it as a discrete number nowadays. That said, this card often crops up within pre-built gaming PCs, and for a decent price all-inclusive too.

The RTX 3060 Ti remains the mid-range champion. The Nvidia RTX 3060 strays a little too far from the pack of high-end Ampere to have the same impact generation on generation. But in that same breath, it must be said that the RTX 3060 is a fine upgrade for a 10-series or older card, especially if at close to the MSRP, and one that will likely see you confidently through the next few years of major game releases. 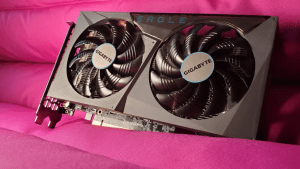 8. Nvidia GeForce RTX 3050
There is no graphics card under $300 that we would recommend bar the GeForce RTX 3050. Though it didn’t take much to defeat AMD’s Radeon RX 6500 XT. The RTX 3050 is still a difficult GPU to recommend heartily, however, as it’s neither readily available nor as cheap as it should be.

The RTX 3050 is a much smaller GPU than the RTX 3060 12GB, and like any good PC gamer, we would recommend the larger chip. That said, if you can’t stretch your budget any further, the RTX 3050 will deliver GTX 1660 Ti performance with the benefit of DLSS.

That means you’re getting a graphics card that can handle 1080p at decent settings most of the time, although some titles will push you well below the 60fps goal many of us aim for. And while this may be the most affordable Nvidia graphics card of this generation, it’s still a hefty chunk of cash when you can’t just whack everything on full and enjoy your game of choice the way it was meant to be played.

There’s also support for ray tracing with the RTX 3050, though its weak-heart innards aren’t going to stand for much of that.

Where we wanted at least RTX 2060 performance, we ended up with GTX 1660 Ti frame rates with a little RTX frosting on top. Sure, that’s tasty where it sticks, but is another example of a card designed and priced within the limits of a pandemic and a GPU shortage, rather than showing off Nvidia’s silicon wizardry to its fullest.

As the basis of a prebuilt gaming PC, the RTX 3050 is the better option of what’s out there on a tight budget. That said, you can find really good RTX 3060 12GB PC deals fairly regularly, and with a little patience, you may be able to grab a much more capable graphics card.